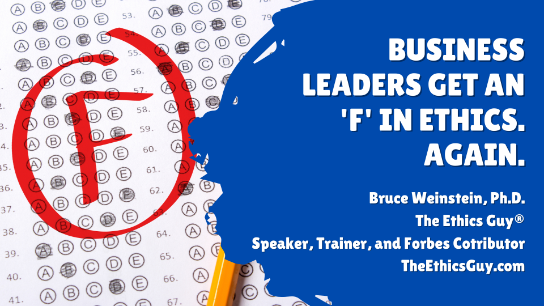 Business Leaders Get an 'F' in Ethics. Again.

That's one of the most disturbing results of Gallup's annual poll regarding the perceived integrity of the professions.

Each year, Gallup asks people to rate the honesty and ethics of a range of professionals. In the most recent poll, nurses again topped the list, followed by medical doctors (as Gallup refers to them), grade-school teachers, and pharmacists. Judges, clergy, and auto mechanics occupied the middle, and, as has been the case for many years, business executives were among the least well regarded.

At the bottom were advertising practitioners, members of Congress, car salespeople, and, at the very bottom yet again, lobbyists.

There are three points worth making about the low rating the public gives business people:

Poor ethics are no laughing matter

There are over 32 million responses to a Google search for “business ethics jokes.” For example, in a Randy Glasbergen cartoon, two businessmen are having lunch. “The way I see it,” one says to the other, “unethical ethics are better than no ethics at all!”

And in a Matthew Diffee cartoon for The New Yorker, a board member tells his colleagues, “It’s just us today. Campbell called in ethical.”

The reason these jokes work is because they squeeze humor from a nasty truth: Too often, business leaders and the companies they represent take the low road.

When Takata air bag engineer Bob Schubert writes “Happy Manipulating!” in an email to colleagues, or Volkswagen admits to creating technology that would allow its cars to evade clean air rules, the grave risk to the basic tenets of business ethics and simple decency is serious, real, and far from funny.

This may be a strange thing to say in a business publication, but some things are more important than making money. These include not hurting people, being truthful, respecting client confidentiality, and treating employees fairly—the principles of ethics, in other words.

High character is good for business

It turns out that companies that take ethics seriously aren’t merely doing the right thing. They’re doing the profitable thing, too.

As I explored in a Fortune article about Kickstarter, it’s possible for a company to be both in the right and in the chips. In fact, doing both is the only way to succeed. While businesses that engage in unethical behavior to make more money often succeed at that goal, they only do so in the short term.

My father once bought a life insurance policy from an agent I’ll call Eric who turned out to be a crook. For several years, Eric embezzled thousands of dollars from my dad, and I vividly recall the trial in which Eric’s attorney told the jury, “No one will ever trust this man again.”

Eric’s crime allowed him to enjoy some of the finer things in life until the ruse caught up with him. He was sentenced to prison and later died of a heart attack at 62.

Eric’s story stands in sharp contrast to what happened once to Speaker Hall of Fame member Terry Brock.

A potential client asked Terry if he could speak on the topic of how businesses can fight the trend of video conferencing. Terry was loath to turn down a lucrative speaking engagement, but one of his areas of expertise is technology, and he believed there were a lot of benefits to virtual meetings.

So Terry decided to be upfront with the client about his concerns. “I told them that when it comes to in-person vs. virtual meetings, the solution is not either/or but both/and,” he said. For his honesty, Terry was rewarded with the speaking engagement—and at a higher fee than the client had ever paid for a presentation.

Business ethics can be improved

Public perception is malleable, so there is no reason why business executives have to remain stuck in the bottom of the Gallup poll. I propose the following four strategies for businesses that want to be regarded as honest and trustworthy:

—Publicize your values. It never ceases to amaze me how few businesses list their company’s values and ethical commitments on their websites. This is the first Call to Action that I give businesses that hire me as a consultant: put your organization’s mission statement, code of ethics, and core values on the home page where they can be readily accessed.

—Hire for character. The values and ethical standards you post on your website don’t mean anything if they’re not embodied by your employees. You understandably devote a lot of energy, time, and resources to hiring people who are knowledgeable and skilled. Isn’t it at least as important to hire people who are consistently honest, accountable, loyal, and fair—that is, men and women of high character?

—Fire for character. Just as it’s crucial to bring high-character people into your organization, so too is it to get rid of those who don’t share your organization’s values. No matter how much the senior vice president of marketing knows about his or her field, if he or she has played fast and loose with the truth or hasn’t honored commitments to clients, why keep him or her on the payroll?

—Reward excellence. I once spoke at a Fortune 100 company on the day when five employees who embodied the company’s values were flown in to receive a prestigious award and a handsome bonus. One young man had found a $15,000 diamond ring in his store’s parking lot and had gone to considerable lengths to track down the owner. Imagine how the customer felt when her ring was returned. And imagine the positive word-of-mouth she gave the company.

For Terry Brock, the technology speaker I cited earlier, the message of his own story isn’t necessarily that honesty pays. Rather, it’s that honesty is valuable for its own sake. “When you value the truth above money,” he said, “sometimes you win, sometimes you lose, but either way, you get the pride that comes only from running your business with integrity.”