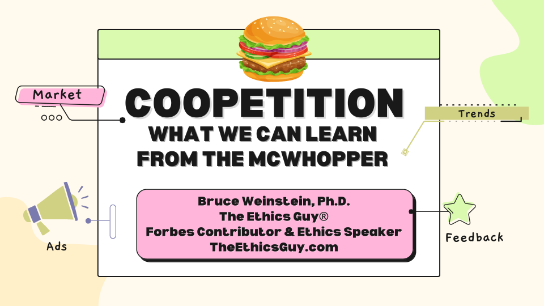 Coopetition: What We Can Learn From The McWhopper

Coopetition: What we can learn from the McWhopper

In The Godfather: Part II, Michael Corleone recalls a piece of valuable advice he received from his father: “Keep your friends close, but your enemies closer.” I was reminded of this line when Burger King’s invited McDonald’s to join forces and create a “McWhopper,” whose proceeds would benefit the non-profit organization Peace One Day. McDonald’s rebuffed the offer, but Burger King’s overture shows how it can make financial sense for competitors to work together, and not only for philanthropic reasons.

There’s money to be made by getting in bed with your enemy. “Coopetition” is the term for this, and here are three reasons why it may make sense for your organization to reach out to your competitors—along with two important caveats.

Working with his competitor made Richard A. Solomon a better lawyer, he told me. Rich is an attorney in private practice in Long Island who specializes in commercial litigation between small businesses. Twenty-five years ago he joined forces with an adversarial law firm, “because they’re a large and diverse organization with a wide range of expertise. For example, they cover estates, which I don’t.”

Rich and the members of that firm worked on opposite sides of hundreds of cases involving asbestos personal injury. “When I left my previous employer to go solo, I remembered how honorable and hard-working those attorneys were, so I asked them to work with me on some complex projects where their knowledge and skills would be beneficial.”

“I remember a time,” Rich added, “when I represented the child of a murder victim and needed experts in estate, wrongful death, and forensic investigation. This firm had these experts on hand, so we teamed up and achieved a highly favorable settlement. I couldn’t have done that on my own.”

Coopetition can have nice personal benefits too. Rich said his colleagues from the other firm were adversaries when he was single, but 15 years later, some of them traveled great distances to attend his wedding.

Richard S. Wellins, senior vice president of talent acquisition company Development Dimensions International (DDI) and co-author with Tacy M. Byham of Your First Leadership Job, told me how coopetition benefited his company in a way that wouldn’t have been possible otherwise.

By forming a partnership with a rival, if only for a single project, Richard was able to meet the client’s needs, and DDI got a valuable opportunity it would have missed.

Coopetition benefits the people you serve

When he became Prime Minister of the United Kingdom in 1940 near the onset of World War II, Winston Churchill was a member of the Conservative Party. But even though they had radically different ideologies from his own, he reached out to leaders in both the Labour and Liberal parties. “He felt this was a situation that required the voice of everybody,” Jonathan Sandys, co-author with Wallace Henley of the book God and Churchill, told me. “He believed that if the leaders united, the people will unite, and that’s exactly the result he got.”

Sandys is Churchill’s great-grandson, so he has a unique perspective of the power of coopetition. “It was instrumental in winning the war,” he said about Churchill’s policy of collaboration. “One of the major reason we have cabinets is so there is an array of ideas that will challenge the head of state when necessary. Churchill knew he would make mistakes if he went about his work all alone.”

Coopetition doesn’t happen in Britain today very often, Sandys noted. “Working together is not politically fashionable now, and the result is that each party is vying for power instead of focusing on the needs of the people.” Which is what politics is supposed to be about.

Before you engage with your competition, however, it’s worth considering the following two caveats.

How you reach out matters

McDonald’s learned about Burger King’s proposed one-day-only merger the same way you and I did: the media. CEO Steve Easterbrook was perturbed by the way that BK brought the matter to his attention and said on Facebook that the two businesses could have a bigger impact by working on something long-term and sustainable. “P.S.,” he added, “A simple phone call will do next time.”

There’s a lot to be said for private, one-on-one communication before announcing your great plan to the world.

There can be a nasty downside to throwing in your lot with your competition: Some of them are less ethical than you.

I spoke with a successful entrepreneur I’ll call Jane whose company was featured in a best-of-the-city issue of New York magazine. She told me how a competitor offered her a lot of money to work together, but she declined because “it just didn’t feel right.”

Jane’s intuition was supported by some troubling facts: Her competitor had poor reviews from many sources. She had good reason to believe the other company simply wanted to boost its own reputation by piggybacking on her good name.

That’s not coopetition. It’s co-option, and Jane was smart to say no.