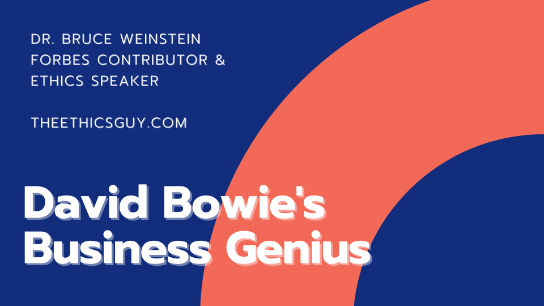 Smart executives and entrepreneurs in all fields—not just entertainment—would do well to learn from how the Thin White Duke ran his commercial affairs. So here are three leadership lessons gleaned from Bowie’s substantial business success. (For maximum effect, it’s best to begin listening to a Bowie album or playlist now, if you’re not already doing so.)

In the late 1980s, Bowie fielded offers from a variety of record labels that wanted to reissue his back catalogue on the then-novel compact disc format. Then as now, some companies tried to maximize profits by releasing CDs with minimal artwork, substandard audio quality, and truncated song lists. Perhaps you, like me, were bamboozled by some early Elton John CDs that cut songs from the original albums and sounded horrible to boot.

Rykodisc, then a small independent label, beat out its deep-pocketed competitors for the Bowie contract by promising not to do this. “Bowie said through a representative that he wasn’t interested in releasing budget titles,” said music executive John Hammond, who led the label’s marketing department at the time. “He wanted the CDs to be sold at full price and to reflect the high quality of the original albums’ production and artwork.”

That focus on excellence landed Rykodisc a lucrative deal and resulted in reissues that have stood the test of time. Geoff Mayfield, then the retail editor at Billboard, calls the first one—an elaborately packaged boxed set called Sound + Vision—“amazing.”

“You’d look at it and say, ‘Wow, someone really put some thought into the visuals,’” he says. “The set was almost as much fun to put back together as it was to listen to.”

Whatever you sell—financial products, apps, or consulting services—David Bowie’s approach to his work and Rykodisc’s experience marketing it are instructive. You put a lot of effort into developing an extraordinary product or service, so the way you sell it should evince that care too.

In 1998 David Bowie grasped the power of the nascent Internet and took full advantage of it. He created his own Internet Service Provider (originally DavidBowie.net) years before YouTube, Facebook, and Twitter existed and everyone had a website.

“I wanted to create an environment where not just my fans, but all music fans could be part of a single community where vast archives of music and information could be accessed, views stated and ideas exchanged,” he said on the eve of the project’s launch.

Among the features of Bowie’s online community were:

—Personal home pages fans could create for themselves,
—Personalized email addresses (YourName@DavidBowie.com),
—Live chats with Bowie and other artists,
—Songwriting competitions, one of which offered a co-writing credit with Bowie himself,
—Cybercasts (what we now call live streaming), and
—3-D avatars for interacting with other fans within the portal.

They’re commonplace now, but these features were new at the time, and they allowed users to interact with fans and artists in ways never before possible. As a result, Bowie’s already sizable fan base increased exponentially.

Gone are the days when marketing was mostly about conveying the excellence of your product or service. If you want what legendary business consultant Ken Blanchard calls raving fans, you have to engage them in innovative ways, just as David Bowie did.

Fight for What You’ve Created

Many artists are distressed to learn that they don’t own all, or even some, of the rights to their work, but when this happened to Bowie, he decided to do something about it. As the BBC’s Tom Espiner reported, Bowie, his financial manager, and his banker sold bonds backed by royalties from Ziggy Stardust and the Spiders from Mars, Diamond Dogs, Let’s Dance, and other albums from the heady, earlier days of Bowie’s career. Bowie used a portion of the $55 million proceeds to buy out his former manager, with whom he’d had a falling out.

Other artists, including James Brown and Iron Maiden, followed suit, but Bowie Bonds, as they became known, fell prey to radical changes in the music industry, and they were soon downgraded to one level above “junk bond” status. For two reasons, however, it would be misguided to conclude that Bowie’s efforts were misguided.

First, some analysts see a bright future for asset-backed securities. “The risks are high: assets with little history are hard to model and vulnerable to sudden changes in regulation or government intervention,” says Reuters financial writer Neil Unmack. “But enough of them will succeed for Bowie’s financial oddity to stay in fashion.”

More broadly, though, Bowie’s story illustrates the power of fighting for what’s yours. Two essential documentaries, Paul Justman’s Standing in the Shadows of Motown and Denny Tedesco’s The Wrecking Crew, reveal what can happen when an artist doesn’t retain the rights to his or her creation, and it’s not pretty. David Bowie is a rock icon for making some of the most stirring music of the past fifty years, and he’s a business icon because he remained in control of every facet of his career.

Whatever the next format of music turns out to be, you can bet David Bowie’s peerless catalogue will be found there. And whether or not you find his music out of this world, as I do, only a true space oddity would ignore Bowie’s lessons in how to run a business with intelligence, class, and success.