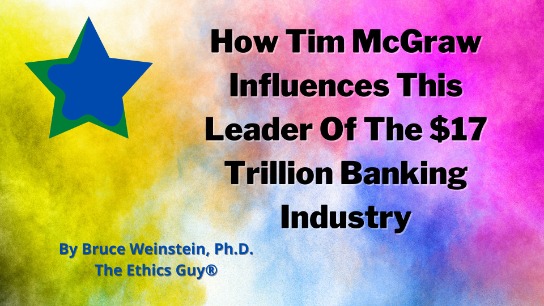 Humility and kindness are two key concepts in a great song by Tim McGraw. They're also the core leadership principles for Robert S. Nichols, president and CEO of the American Bankers Association.

Nichols has been a successful leader in both the government and nonprofit sectors. Before he joined ABA in 2015, he led the Financial Services Forum, a non-partisan financial and economic policy organization, for ten years. He served in the George W. Bush administration as the assistant secretary for public affairs at the Treasury Department and has had leadership roles in both houses of Congress and the West Wing.  Nichols received the Alexander Hamilton Award, the highest honor of the U.S. Department of the Treasury, and the influential political website The Hill consistently ranks him as one of Washington’s top lobbyists.

Nichols and I spoke recently about his leadership of the ABA and why humility and kindness are so important to him.

Bruce Weinstein: You've had leadership roles in both government and the nonprofit world. What are some of the similarities and differences in your approaches to leadership there?

Rob Nichols: In both worlds, there are a lot of young people, and I've found that mentoring those who are coming up is a smart thing to do. It not only helps build your network, but it also engenders good will and helps to strengthen the enterprise you're in.

More generally, just being humble and kind has been important. That's something I learned early. There are too many primadonnas in this world. I don't want to be one and don't want to work with any.

The Tim Mcgraw Song, "Humble and Kind," is for me a very good barometer of how to lead. It's something I've tried to be in both the government and with nonprofit organizations.

Weinstein: What prompted your move from government to the nonprofit world?

Nichols: I was recruited by Hank Paulson [former Secretary of the Treasury] to be the president of the Financial Services Forum, a trade association I led before the ABA, for about a decade. The mission of the forum--to help create a stronger set of economic growth conditions for our nation-- really appealed to me.

I had other opportunities to go to other walks of life that were a little more commercial, less mission-focused. But the idea of working at the intersection of public policy and finance to create a set of regulatory and supervisory conditions that would allow financial institutions to better serve their customers, clients and communities was really appealing.

So I turned down a number of other opportunities that would have been lucrative but that didn't serve what I saw as a noble mission.  The intermediation of capital, if done efficiently, effectively and safely, can be a powerful thing. It can create jobs, growth and prosperity.

Weinstein: Can you say a little more about what a financial intermediary does?

Nichols: Happy to. The banking sector is the cardiovascular system of the economy. It takes the aggregate savings of the community and shares it in the form of risk capital or credit deployment so that a small businesswoman or man can take an idea, take some capital from a bank and deploy the capital in a way that creates economic growth. This ultimately enhances prosperity and creates jobs.

Whenever I travel overseas, people tell me, "You have this cool banking system where you have community banks, midsize banks, regional banks and global banks." Each plays a unique role in the financial ecosystem, and that's one of the reasons we have the world's most robust, large and well-performing economy. There are other reasons too--productivity, technology enhancements and the labor force--but the banking system provides for the intermediation of capital in a safe, sound and secure way.

That's one of the powerful things about our economy, and that's why it's an honor to serve this sector.

Weinstein: What have been some of your successes this past year?

Nichols: We've had one of the best association years in maybe a couple of decades. We had a bipartisan bill passed in a Congress that's been hyper-partisan. We made a venture investment in a FinTech firm. We recruited 250 new members this year, the most we've ever recruited in a year. And we have a campaign called America's Banks that explains the diversity of the U.S. banking sector, what banks are doing to serve customers, clients and communities, what they're doing from a corporate social responsibility standpoint and what they're doing from a charitable standpoint.

Weinstein: Speaking about corporate social responsiblity, in your view how important is character in the banking industry?

Character is foundational to an effective and functioning financial and banking system. If there's not sufficient trust in the financial sector, it's not going to operate properly.

Weinstein: In your leadership of the American Bankers Association, how do go about hiring high-character people?

Nichols: When we talk to new employees about what will make them successful at the largest financial trade association in the United States, we talk about core competencies in two areas: collaboration and accountability.

With respect to accountability, when you make a mistake, admitting it is important. If you own the mistake and say, "I goofed that up. I am so sorry, I won't goof up again," you will succeed.

With respect to collaboration, we employ over 350 people in five floors in an office building in downtown D.C., so you can get siloing or stove piping. I'm always trying to undermine and erode that.

The earlier that we show our junior executives the whole chessboard, the more quickly they'll grow into seasoned executives, instead of staying in one little silo and not seeing the six other parts of the problem. From a labor force management standpoint, there's a huge benefit to collaboration.

Another benefit to collaboration is that you get a better result, a better product more quickly. We teach here that you can lead from any seat. You don't need to stand on ceremony if you're a new employee. If you have a good idea, you should raise your hand and say, "I've got this idea."

Weinstein: Even though you're talking about the benefits of collaboration with respect to your leadership of the American Bankers Association, I can't think of an organization where that would not apply.

Nichols: I think you're probably correct.

Weinstein: You opened by talking about humility. The thing that's so appealing about humble people is not that they have a low estimation of themselves. They have an accurate one, namely that their success depends upon other people's contributions.

Nichols:  You will just be more successful when you share success with others, because that inspires greatness in others. It inspires them to work harder, and it inspires them to better themselves. So if I were to run around as CEO and claim credit for everything, even if it's something I did I single-handedly, that would reflect poorly on the team.

If you give credit to others openly, consistently and repeatedly, you get a jazzed-up and excited workforce that wants to do better because they like the environment of shared success. Teamwork isn't collaboration for collaboration's sake; it's about creating successful outcomes. The whole idea of sharing credit as widely as sensible really pays off, and it gets people excited.

Weinstein: So when team leaders want to take the credit for themselves, is that just being short-sighted?

Nichols: I have on my desk a plaque that says, "There's no limit to what a man can do or where he can go if he doesn't mind who gets the credit." I've heard it attributed to a lot of different people, but it's true.

I can't answer your question about why some people feel that the credit should be shined exclusively on them. But in my leadership model, credit sharing has become the foundation for the successful three years that I've had here.