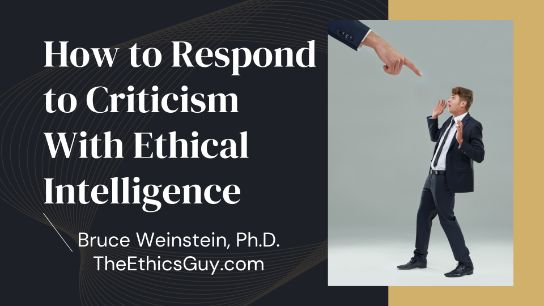 How to Respond to Criticism With Ethical Intelligence

The first job I had after graduate school was as an assistant professor at a large state university, and on occasion, I was called upon to write book reviews for scholarly publications. It was exciting to be in a position that commanded respect — my words were now going to be read by a worldwide audience, not just by my professors. But part of the thrill had to do with evaluating some of the same people whose work I had read as a student. Not only was I their colleague, but I also had a degree of power over them, which I thought was cool.

My first review was of a book written by someone my boss himself had studied under, and I had both positive and negative things to say about the work. I showed my boss a draft of the review and figured he’d be pleased with what I thought was a thorough, well-written critique.

His response took me by surprise. “Don’t take potshots if you don’t have to,” he said as he pointed out a troublesome passage. I don’t remember exactly what I wrote in that portion of the review, but I do know it was more a display of how clever I could be than an on-point discussion about the argument the book’s author was making.

Two things about the experience have stayed with me:

1. I learned to be on guard for using my power and authority to cut someone down to size.

2. My boss offered useful criticism without being unpleasant. In fact, it was his restraint that made the criticism so helpful. He modeled the right way to criticize and, in so doing, criticized me with ethical intelligence.

In chapter 6, we looked at ethically intelligent ways of giving criticism to team members. It’s now time to turn the tables and reflect upon how to accept valid criticism with ethical intelligence and how to respond when the criticism is wrong-headed, mean-spirited  or downright hostile.

Why It’s Hard to Be Criticized

Criticism done well seeks to get someone back on track, to inspire or motivate that person, and to bring out the best in him or her. Why, then, is it so unpleasant to be on the receiving end of any criticism, even that of the ethically intelligent variety?

It is extraordinarily difficult to see oneself accurately. No matter what your level of self-esteem is, you probably have a distorted view of who you really are. If your self-regard is in the mid- to high range, you’re more likely to notice the things you do well and overlook the things you don’t. If your self-esteem is low, you tend to focus on the mistakes you make and forget or deny the things at which you excel. Criticism of those with positive self-esteem challenges their view of themselves as beyond reproach, even when the criticism is ethically intelligent. “I can’t possibly be so flawed,” such a person thinks upon hearing such criticism, and his or her defenses go up.

Accurate criticism for the person with low self-esteem confirms their biggest fear: “I am indeed a flawed person.” This hurts, and it’s only natural to resist things that cause painful feelings. People with low self-esteem may cover up the sting of criticism by responding with resentment or anger. Any way you slice it, criticism doesn’t feel good and is understandably met with resistance.

But it’s one thing to appreciate why criticism is unpleasant and another to justify the natural tendency to push it away. When criticism is viewed objectively, apart from the trappings of one’s ego, one can see that it’s irrational to ignore good criticism. You can always do your job better, no matter how well you actually do it (or think you do). Accepting, even welcoming ethically intelligent criticism is one of the best ways to grow professionally and personally.  Living rationally means, in part, acting prudently, and taking good criticism to heart is simply a prudent thing to do.

What Is Ethically Unintelligent Criticism?

As the story about my boss illustrates, it is indeed possible for one’s superior to offer criticism with ethical intelligence. But other varieties of criticism seem far more common, and it’s worth expanding the scope of our investigation so that we can consider these types of critique. We live in an age where it’s possible to leave scathing criticism anonymously on the Internet, where “reality” TV and talk radio programs offer a constant display of the most childish ways to find fault with others, and where political candidates use personal attacks rather than reasoned argument to win elections. It makes sense that the term for personal attacks online is “flaming” someone; the point of such criticism is to hurt, to demean, and to leave scars. And it does.

As a public speaker and writer, I’ve noticed several recurring elements of critics who send me what my wife calls “nastygrams”:

1.  The critics usually hide behind nicknames and don’t provide their true identities.

2.  They focus on my personal characteristics, my qualifications as an ethicist , how the critic feels about me — everything but the arguments I’m making.

3. The nastier and more mean spirited the criticism is, the more likely it is to be expressed poorly through sloppy grammar, frequent misspellings, and a tendency  to overuse capital letters and exclamation marks.

Nastygrams are ethically unintelligent because they say nothing about the truth content of the position they’re attacking.  Ad hominem arguments (arguments in which the object of criticism is the person rather that what he or she is saying) are fallacious. They’re not really arguments at all, but expressions of raw, unexamined emotions.   Which reminds me of someone thing my grandfather used to say: “Only an idiot would make an ad hominem attack."

OK, my grandfather didn't say that. I made it up. But it seemed like something he would say.

Another reason why nastygrams are ethically unintelligent is that they’re intentional violations of the Do No Harm principle.  I realize personal criticism has no philosophical validity, being on the receiving end of it still is an unpleasant experience. I know that the kind of people who choose to write vindictive emails that seek not to enlighten but to destroy and who don’t even have the courage to be accountable have probably been beaten up in some way themselves — but it still hurts. If those bent on hurting people through Internet communication could see the effects of their actions, or if their identities were revealed in their emails and posts, I suspect that many of them would think twice before hitting Send.

How to Respond to Criticism with Ethical Intelligence

When someone criticizes you, even if it’s not your boss, an ethically intelligent response includes doing the following things.

2. Recognize that you may not be right. You may be unaware of one or more of the facts relevant to your argument, or you may have ignored some of the rules or principles at stake.

3. Realize that ad hominem attacks say more about the person making them than about you. Rather than sink to the level of such attacks, it’s wiser to ignore them.

4. Transform a glass of poison into a healing elixir. In my lectures, media interviews, and books, I use the personal attacks I’ve received as examples of how not to give effective criticism.  Doing so alleviates their sting and may help others to resist taking the low road themselves.  Tina Fey went so far as to put one nasty e-mail on the back cover of her memoir, Bossypants, and her humorous discussion of it was prominently featured in the New Times Times review of the work.

But you don’t have to be a public speaker to turn malicious criticism into the stuff of ethical intelligence.  Simply by being aware of how lousy it feels to receive nasty correspondence can prompt you to avoid being a perpetrator of it.  I often struggle with such ignoble impulses myself, so I know how hard it is to put this idea into practice.

5.  Be grateful.  After you’ve received constructive criticism, the best thing to say is, “Thank you.” You’ve just been given an opportunity to grow, and it’s a gift.  If you’ve received ethically unintelligent criticism, and you’ve taken the high road in response to it, you should be grateful for having resisted the impulse to lower yourself to the critic’s level.

Our goal in life can be to bring out the best in others and ourselves, or it can be to puff up our own egos and debase others by exploiting our power over them. If the first is our mission, we would do well to give criticism respectfully and receive it graciously whenever it is offered in good faith.

Thank you for reading this post. I hope you're having a good day!

The first 7 people to sign up for my ethics course, “Lead Like a Superstar to Build a Rocking Accounting Business,” by December 31, 2022 will get 20% off the fee. Good for 1 continuing education credit in ethics. Use the code SUPERSTAR20. It will work only for this course.

A slightly different of this blog post appeared originally in my book Ethical Intelligence: Five Principles for Untangling Your Toughest Problems at Work and Beyond.