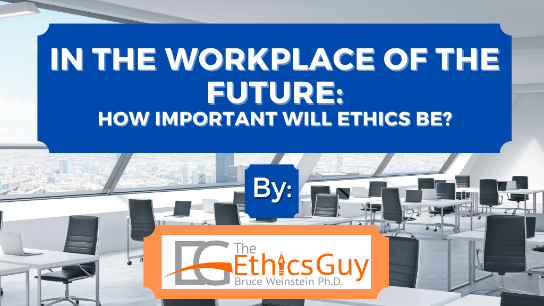 In The Workplace Of The Future, How Important Will Ethics Be?

In the workplace of the future, ethics will be even more important than it is now. That’s the overwhelming majority vote in a poll I ran on my LinkedIn page.

I’ll present a sample of the four kinds of responses I received and then provide my own analysis, which supports the majority view.

On LinkedIn I posted the sentence fragment, “In the workplace of the future, ethics will be....” and invited the community to select one of four possible ways to complete the sentence:

The poll received 178 votes. Here’s the distribution of those votes: 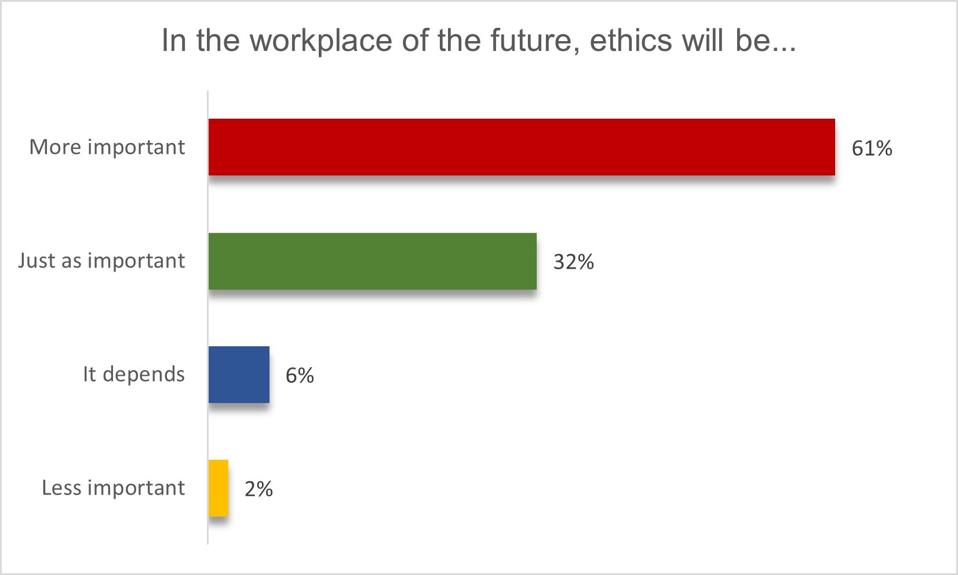 Let’s now take a look at how some of the voters explained their answers.

In the workplace of the future, ethics will be more important than now

“As we advance with technology and artificial intelligence, we should expect a plethora of new ways to measure ethics in our businesses and using the output to guide strategy and decisions should demonstrate that ethics is not only the right thing to do - it’s also a great way to preserve/increase revenue.” Jesse Soria, Group Compliance Manager, Vodafone

“Ethics have always been and will always be important. There is no ratcheting up and down for ethics. Like the foundation to a home, ethics are the building blocks of a person’s values. Opinions change, values should remain strong and steadfast. Otherwise we are doomed as a society.” Robert Berry, That Audit Guy

“The importance of ethics will never change. It will always be critical as an expectation of those who interact with a system. The challenge is not with the importance or the expectation, but the application of ethics. That is something that has continually eroded in my opinion.” Hal Garyn, President, Audit Executive Advisory Services, LLC

“The importance of ethics in the workplace come in waves like the recession. Every 10 years as there is another major corporate scandal or socioeconomic change, the organizations pour money into ethics programs, and they hope for the best. When things go back to normal, the importance of ethics subsides for all but a few. And then rinse and repeat in 2030.” Matej Drašček, PhD, Chief Audit Executive, Hranilnica LON

Jesse Soria makes a good point about how artificial intelligence and other technological advances raise ethical questions that will make ethics especially important in the workplace of the future. Thirty years ago, for example, it was much harder to cheat than it is today. A college professor I know has to go to extraordinary lengths to ensure that the material that students submit on exams and in papers are authentic and not taken from unattributed sources or purchased online.

As Robert Berry and Hal Garyn suggest, however, ethical standards do not legitimately vary from time to time. A practice may be widely accepted but that does not make the practice acceptable. For example, child labor was widely practiced in the U.S. for many years and remains a common practice in other parts of the world. But—grade-school paper routes and the like aside—child labor was wrong then, and it’s wrong now.

Dr. Matej Drašček’s cynicism about the wavering importance that people place on business ethics is understandable. How can we be optimistic about the role of ethics in the workplace when too often bad actors get away with their dishonest deeds? See, for example, William D. Cohan’s article “How Wall Street’s Bankers Stayed Out of Jail” in The Atlantic.

There are valid arguments, in other words, to support three of the four possible responses to the poll question. The fact that only two percent of voters selected the response, “In the workplace of the future, ethics will be less important than it is now,” coupled with the voters’ reluctance to go on record about why they voted this way, makes this fourth choice an outlier.

Nevertheless, the smart money is on the prediction that in the workplace of the future, ethics will be more important than it is now. Technology is moving so quickly that it is outpacing our ability or desire to make sense of it. It will take increased vigilance of managers and other leaders in the workforce to ensure that only honest, accountable people are hired and promoted.

The same vigilance will be necessary to train everyone—new hires and veterans alike—in how to recognize and squelch new threats to business operations. A.I. will make it easier than ever for criminals to launder money, commit credit card fraud and manipulate markets, to name just three illegal and unethical practices. That, coupled with the economic fallout of the pandemic, will make ethics training and ethical behavior more important than ever at work and beyond.

Ethics has always been of the utmost importance in the workplace. It is about to become even more so.

Thank you kindly for reading this post. I hope you're having a good day (or at least not a bad one).