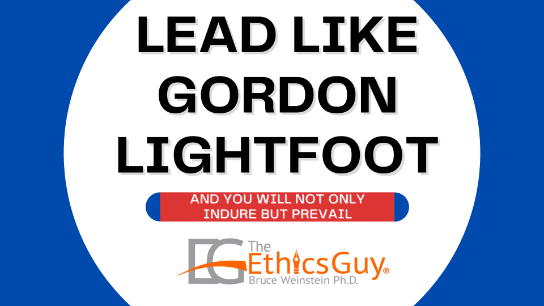 If You Could Read My Mind, an absorbing, lovingly crafted new documentary about iconic singer-songwriter Gordon Lightfoot, presents seven leadership lessons you can’t afford to ignore. Whether or not you’re a fan—but how could you not be?—this essential film by Martha Kehoe and Joan Tosoni reveals the secrets behind Lightfoot’s sustained success.

Follow even a few of these lessons, and—to borrow a phrase from William Faulkner Nobel Prize acceptance speech—you will not only endure but prevail.

How many times do you get a pitch for a so-called fast track to riches? Every week my inbox and LinkedIn messages are rife with come-ons for making millions quickly and with little effort.

Lightfoot developed a passionate following by performing constantly in the early 1960s. Still, he knew singing and playing guitar weren’t enough to build a career on. “If I’m going to earn a living doing this, I’m going to have to write some songs...I knew I had to sit down and do the work,” he says early in the documentary.

As a result of this intense focus, ”out popped ‘Early Morning Rain,’ and that turned out to be one of my biggest, most important songs.”

Lead like Lightfoot. Sit down and, as Larry the Cable Guy says, git ‘er done.

There’s No Substitute For Talent

Working hard is necessary but not sufficient for being an exceptional leader. Lightfoot wouldn’t be where he is today if he were a hack songwriter and unable to bring his songs to life in the studio and in concert. Yes, he got better as he went along, but his talent was always there, waiting to unfold.

There’s a reason Lightfoot’s song “If You Could Read My Mind” continues to be played widely and covered by artists: it’s marvelous. There’s also a reason why thousands of songs written and recorded at the same time are forgotten: they were mediocre.

Whatever your own field is, if you don’t have a talent for it, you won’t go very far. Perhaps that’s not a goal of yours to begin with.

But if you want to soar, there is no substitute for having talent. No matter where you are in your career—just starting out, well into it, or winding down—it’s never too late to switch over to something you’re better suited for.

Lead Like Lightfoot. Nurture your talent or find a different field you’re better suited for.

Be A Servant Leader

Decades after he wrote his hit songs, he still gets a kick out of playing them for fans.

When your focus is on serving people rather than yourself, you can’t help but smile, no matter how tired you might be of doing the same thing over and over. I can’t speak to working on an assembly line, of course. No amount of reflection on my customers would make me smile, I reckon.

But if you’re fortunate to be doing something you love, Lightfoot’s attitude is worth keeping in mind when the going gets tough.

Lightfoot is a servant-leader. Robert K. Greenleaf coined the term to refer to someone who “focuses primarily on the growth and well-being of people and the communities to which they belong.” The servant-leader “is sharply different from one who is leader first, perhaps because of the need to assuage an unusual power drive or to acquire material possessions…”

“It’s always about the songs,” Lightfoot says. “That’s all I think about when I’m performing—to make them as good as I can.”

Lead like Lightfoot. Find joy by focusing on service.

Early in If You Could Read My Mind, Lightfoot bemoans the lyrics he wrote for his song, “For Lovin’ Me.” Those lyrics include these lines: “So don't you shed a tear for me / Because I ain't the love you thought I'd be/ I got a hundred more like you/So don't be blue / I'll have a thousand 'fore I'm through.”

He now says bitterly, “I’ll never write another song like that for as long as I live. It was a very offensive song for a guy to write who’s married with a couple of kids.”

Who among us wouldn’t want to redo something—or a lot of things—we did years ago? It’s not possible (yet) to get into a time machine and undo them, but like Lightfoot, we can acknowledge our sins and move forward accordingly.

Lead Like Lightfoot. Take responsibility for past mistakes and do what you can avoid repeating them.

Perfectionism Has Its Place

There’s a reason why albums like Sundown, Summertime Dream and Salute hold up years after they were made: there’s a baked-in excellence that makes them sound fresh every time you listen.

That excellence didn’t happen on its own. It had a taskmaster behind it. “I was in the studio around the same time when Gordon was re-recording all of his hits” for the Gord’s Gold album, says singer Anne Murray. “I heard some rumblings from some of the musicians...about how particular he was about everything and how many takes he would insist upon.”

Of course, perfectionism can be counterproductive. Captain Queeg in Edward Dmytryk’s The Caine Mutiny and Ace Rothstein in Martin Scorsese’s Casino are perfectionists to a fault. They’re tyrants. But Lightfoot’s approach to recording is perfectionism at its best: a commitment to excellence that results in albums that stand the test of time.

Lead like Lightfoot. Know when it’s important to be a perfectionist.

Lightfoot developed a drinking problem that interfered with his performances and relationships. Mo Ostin, the president of the label where Lightfoot was under contract, pulled him aside one day and said, “Gord, you better stop your drinking.” Beverly Lightfoot, Gordon’s sister and office manager, told him the same thing. He paid attention and quit.

You can see the difference it has made when you compare performances of his drinking- and post-drinking days. In videos of the former, he’s not only much heavier, but he doesn’t smile much. After he gave up drinking, he became lighter physically and spiritually. His joy in performing is visible and palpable. He looks happier.

“If you plan to face tomorrow, do it soon,” he sings in “Race Among the Ruins.” Indeed.

Lead like Lightfoot. When you’ve got a problem, there’s no shame in admitting it. Then comes the hard part: moving beyond it.

Giving up alcohol wasn’t the only thing that helped Lightfoot become healthy. Exercise made a huge difference too. Canoeing was difficult at first but eventually became routine. “After about four or five days of paddling, you even don’t even have think about it. You just keep doing it.”

One of the trainers at his gym told him, “Motion’s the potion.”

“I’m just about 80 years old and I’m starting to live off of that little idea,” he says with a smile. “Just don’t stop”

A nice side benefit: canoeing in the Canadian wild gave him ideas for songs that “manifested themselves later.”

On a personal note, I’d like to thank Gordon Lightfoot for the many years of listening pleasure he has given me. His recorded songs, with their elliptical, poetic lyrics and memorable melodies and brought to life by a crackerjack band, have been a constant companion since the 1970s.

Along with millions of fans around the world, I owe Gordon Lightfoot an enormous debt of gratitude.

Thank you for taking the time to watch this video!

Yes, I'll present an engaging talk on ethical leadership to your organization. I can also create a series of ethics training videos that are fun, engaging, and results focused. Contact me via TheEthicsGuy.com or call me at (424) 394-0804 (U.S.).