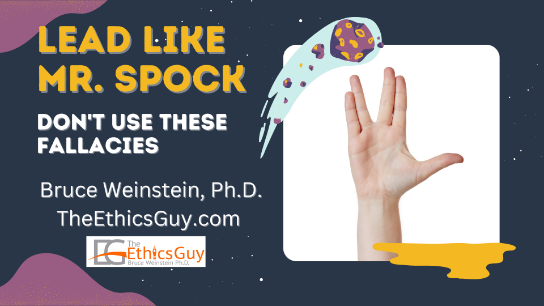 “Star Trek's” Mr. Spock was noted for living a life based on the rules of logic. Here are a few logical fallacies and other errors of argument that you would do well to avoid in your work and in your personal life, too.

Ad hominem arguments are personal attacks that have nothing to do with the truth of the target’s statements. Some politicians are notorious for doing this. Attacking the person and not what the person says nothing about truth and a lot about the character of the attacker. As my grandfather used to say, “Only idiots resort to ad hominem attacks.” OK, he didn't say that, but I thought it would be a nice way to wrap up this section.

In this fallacy, one attempts to justify one’s beliefs by appealing to a powerful figure. Take a look at today's news. Notice how many celebrities or other public figures are quoted about what they think about X, as if the mere fact of that person's social standing makes X likely to be true. It doesn't. If X is true, it's because of the facts about X, not because an authority figure so proclaims “X is true.”

Another fallacious argument is the so-called the Straw Person (formerly known as the Straw Man), in which an opponent’s position is exaggerated and thus made easy to knock down. Suppose Arnold Neblick and Randolph Bullingdon are both running for Prime Minister of Canada. The two are debating about whether schools should offer free lunches to all students. Bullindon says during a debate,  “Arnold Neblick's advocacy of free school lunches is wrong! What next…free food for everyone? "

Neblick most likely doesn't believe in free food for everyone. Sticking to the facts may make for a boring debate, but grand entertainment is not what political or social debates should be about.

There are other abuses of reasoning hat strictly speaking aren’t fallacious but should be avoided nevertheless. One such abuse is inconsistency. Let's return to the fictitious Prime Minister debate. The topic now is same-sex marriage and adoption. Neblick says, “I would leave the question of marriage and adoption adoption to the provinces. That’s the way it has been for throughout Canada’s history until five unelected judges in an illegitimate and wrong decision decided to seize the authority over marriage and wrongfully tear down the marriage laws throughout our magnificent country.”

By using the phrase “five unelected judges,” Neblick is indicting the Supreme Court of Canada as an institution with undeserved power to interpret the law. But if you’re going to take such a position, it’s inconsistent to defer to the same body on other occasions, as Neblick does elsewhere in the debate. Either the Supreme Court is a legitimate institution or it isn’t. You can’t have it both ways.

Note: eagle-eyed readers might have noticed a certain similarity between Neblick's statement and one made by a U.S. politician who ran for President. But to prevent the discussion here from getting sidetracked, I'm using a fictitious politician to make the same point.

There are several ways in which you can get your point across. You can use brute force, as the heads of fascist states do.

Less extreme but still problematic are attempts by politicians like Neblick and Bullingdon to advance their agendas by abusing the rules of logic.

At the other end of the moral spectrum sit democracies, which are founded on the idea that rational discourse—not violence, bullying, or name-calling—is the best way to solve problems.

The smart money is on using reason and logic in your next argument and avoiding fallacious arguments like the ones we’ve discussed here. In the words of Mr. Spock, to do it any other way would be highly illogical.

Thank you for reading my blog!  I hope you're having a good day. Or at least not an awful one.