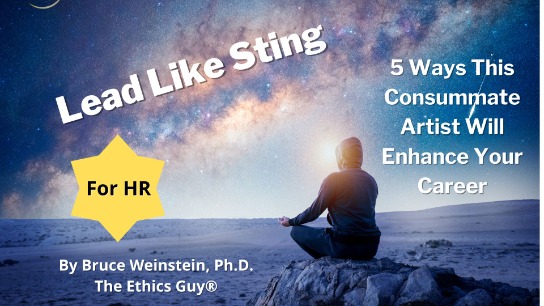 Lead Like Sting: 5 Ways This Consummate Artist Will Enhance Your Career

Sting’s Audible audiobook, Upon Reflection, contains a wealth of fascinating stories about how this consummate musician became the successful artist he is.

Here are five takeaways that will enhance your career.

Give your all, even if it’s only for a few people

When they were starting out, the Police played in small venues. Sting talks about the night they played at the Last Chance Saloon in Poughkeepsie, New York. There were only three people in the audience, but they played with the same intensity they would had it been standing-room only. “An audience is an audience,” Sting says.

They got a standing ovation for their effort. And something even more valuable: credibility. That’s because two of the three audience members were radio programmers. “They saw an act that was just gonna give everything, even for three people in the Last Chance Saloon in Poughkeepsie,” Sting reports, “and they said, ‘That's our band, we're gonna play you.’”

He adds, “[W]e didn't have that sense of entitlement that I'd seen in other bands with big record company advances and big infrastructure.”

When you’re called upon to give a talk and only a few people are there, will you give your all the way Sting, Andy Summers, and Stewart Copeland did? What’s the alternative?

Sting can now surround himself with the best assistants there are, but when he was starting out with the Police, “We were a guerilla outfit. There [was] no fat on us at all. We drove ourselves. We carried our own gear. That paid us dividends... And I'm proud of that.”

If you’re launching your career or starting afresh, what can you do yourself that you might be tempted to delegate to others? Even if you’re at an advanced level, aren’t there some aspects of your operation that you could slim down? How might this benefit you and the people you serve?

You’re never too big to be humble

Several years ago I was in the lobby of a movie theatre in New York when I saw Sting looking at a poster. I called out his name, and he spun around.

“Thank you for the gifts you’ve given the world,” I told him as I clasped my hands in gratitude.

He looked me up and down, smiled, and bowed. That’s right: one of the biggest celebrities in the world humbled himself before a fan.

George Carlin talked about how disappointed he was when one of his childhood idols, Danny Kaye, walked right by him after the young Carlin had waited two hours in the rain to see him. Carlin swore from then on that if he ever became famous, he wouldn’t treat his fans the way Kaye had treated him.

No one can begrudge a famous person their right to privacy. As Martin Scorsese’s The King of Comedy shows, it’s possible for fans to take their passions too far.

But on that fine evening at the Lincoln Plaza Cinemas in Manhattan, one of the most successful artists in music history took it upon himself to thank a respectful fan in a most gracious way.

You and I may not have Sting’s level of global influence, but if Sting can take a moment to be kind to a stranger, can’t we?

Give credit where credit is due

By Sting’s own admission, Trudie Styler, his wife of 35 years, “probably saved my life.” When his career was at a low point, “She's the one who saw something in me that was worth saving. And I'm eternally grateful for that. I don't think I was an easy person to deal with at the time at all. And so I'm just lucky that she stuck in there.”

Sting’s admission reveals that gratitude and humility are two sides of the same coin.

His confession about his wife is not the utterance of a pompous rock star but the pure, sincere expression of a grateful man who sees his relationships with clarity.

How often do you express gratitude to the people who have helped you get to where you are? Could you do it more often? How might this benefit both the people who care about you and you?

Curiosity is the secret sauce of delicious inventions

In the early days of the Police’s tours, the band could afford only the least expensive digs. In Paris, Sting discovered why their hotel cost so little money: it was a workplace for prostitutes.

Sting also noticed a poster there for the play Cyrano de Bergerac and knew the Cyrano loved a character named Roxanne. “Watching the traffic up and down the stairs, I just got this glimmer of an idea,” he says in the audiobook. He went to his room, got out his guitar, “and I conjure up a woman and I give her a name that for me, epitomizes courtly love, courtly romance, and juxtapose that with this rather seedy traffic that I just witnessed.” That’s how the song GRAMMY Hall-of-Fame song “Roxanne” came to be.

Imagine if the Police were just starting out now and found themselves in the same hotel. If Sting had his head buried in his iPhone, he probably wouldn’t have noticed either the trail of clients going up the stairs or the Cyrano poster, and thus there would have been no “Roxanne.”

No “Roxanne,” no worldwide fame and success.

Sting’s story is an inspiring example of what can happen when you’re open to what’s going on around you. The alternate universe I describe is a cautionary tale of what won’t happen if your gaze is fixed on a screen instead.

How might paying closer attention to what’s happening around you benefit you and your work? What magic could you conjure if you put two seemingly disparate observations together?