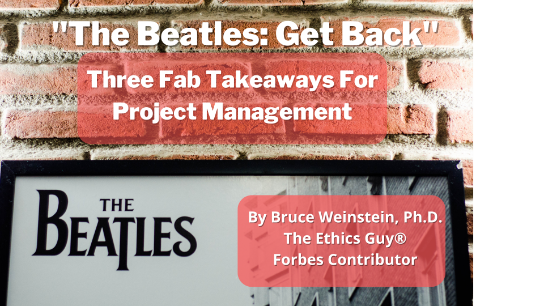 "The Beatles: Get Back" Offers Three Fab Takeaways For Project Management

Peter Jackson’s epic, essential eight-hour documentary, “The Beatles: Get Back,” now streaming on Disney +, offers three leadership lessons for project managers that will enrich your business and your life.

This article assumes familiarity with this late period of the Beatles’ history. For a helpful overview, read Ben Sisario’s summary in The New York Times.

Be open to a fresh perspective

The Beatles: Get Back is catnip for fans around the world. Rarely has any film gone into such detail about the challenges and rewards of artistic creation.

Still, it’s hard not to be bored by large portions of it. The Fab Four clearly are when the story begins in January 1969. Paul McCartney notes that since their manager Brian Epstein died, the group has been rudderless. Paul’s assumption of a leadership role doesn’t sit too well with George, who decides to leave the group but is eventually coaxed back.

Enter Billy Preston, a dynamic musician who happens to be in London for a gig. Preston drops by Apple, the Beatles’ company that serves as a makeshift studio for the recording of what ultimately becomes their last official release, Let It Be. You can see and feel Paul, John, George and Ringo perk up as Preston burns on a Fender electric piano.

Takeaway number one: An outsider can provide the jolt of energy your team needs to soar.

Hard work is unsexy. One reason why portions of the film are tedious is because the work involved in creating memorable music is repetitive. Even the most die-hard fans (including your humble correspondent) will find much of the footage dull.

There’s no getting around it: constructing something of value involves a lot of drudgery.

Paul says as much at one point when he calls on his bandmates to get down to work. There’s an awful lot of clowning around in the documentary, even when the date of a proposed rooftop concert is only a couple of days away. But one reason the Beatles’ work endures more than fifty years after the group disbanded is because they knew how to focus on the work at hand when they needed to. And making good music (or anything good) is, above everything else, work.

Takeaway number two: It’s fine to goof around from time to time when you’re on the job. Who doesn’t? But only focused, hard work will lead to an excellent outcome in project management (and everywhere else).

Be open to spontaneity

“The Beatles: Get Back” changes gears once Paul’s girlfriend Linda Eastman brings her child Heather to the studio. Ringo shares his drum set with her. Heather imitates Yoko Ono’s wail into a microphone. Paul tosses Heather into the air, delighting the girl.

None of this is presented as intrusive or unwelcome to the band. Just as Billy Preston’s high level of musicianship prompts the Beatles to bring their A game to the project, Heather and other family members bring out the joyful side of the Fabs. John improvises a vamp, “Dig It,” around Heather’s playfulness.

That improvisation winds up on the Let it Be album.

Takeaway number three: what others might consider a distraction, great artists--and project managers--consider an essential component of success.

Thank you for reading my blog post. I hope you're having a good day.

Yes, I'll give an engaging ethics presentation to your organization! Contact me here.

P.S. Take my free ethics quiz here. Includes video analysis of each answer. You can also sign up for my free weekly emails on ethics and ethical leadership that will enrich your work in accounting, human resources, engineering, and other essential professions.

P.P.S. Here's my contributor page on LearnFormula / CPD Formula with a description of the courses I offer for CPAs and HR professionals, all of which will earn you one or two continuing education credits in ethics.