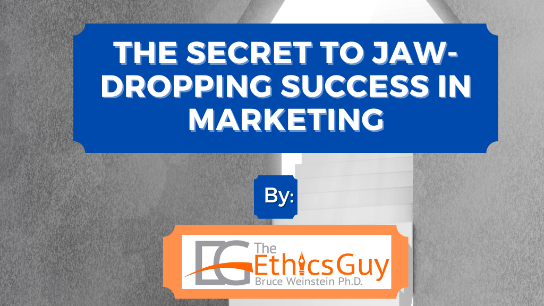 The Secret To Jaw-Dropping Marketing Success Turns Out To Be...

Would you have guessed that the secret to being more successful in marketing and sales is caring deeply about other people? In what follows you'll see why that's true.

"A Wizard, a True Star" is both the name of a classic Todd Rundgren album and the perfect description of sales dynamo, Phil M. Jones. Jones grew up in the U.K. but makes his home in New York now. He is the author of Exactly What to Say, which has sold, as of this writing, over 250,000 copies around the world. He gave a talk called Persuade and Get Paid to a standing-room-only audience at the Minetta Lane Theatre in Manhattan for six hours--with no notes or PowerPoint. That seminar is now available as an audiobook exclusively on Audible.

For Jones, the key to extraordinary success in sales and marketing is integrity.

Bruce Weinstein: How did you develop such a passion for selling?

Phil M. Jones: Selling is the key to success in whatever it is that somebody does in life. My passion is based on the negative stereotype that is associated with the world of selling. Selling is a profession that when done right, supports the ethics of everybody involved in the decision-making process. When done wrong, which is what the stereotype is that many see, it creates something that nobody wants to be a part of.

Weinstein: Why do you think there's such a negative stereotype of salespeople?

Jones: It has been celebrated through mass media. We live in a culture that says success is measured only with a dollar sign attached to it. There's a hard line between what people like to see themselves as and what people see salespeople as.

Let's have some fun for a second here, Bruce. If I ask you to throw some adjectives that would describe a stereotypical salesperson, what kind of words would you reach for?

Weinstein: Manipulative is the first that comes to mind.

Jones: Okay. What else? Keep rolling.

Weinstein: Self-centered. Magician. Can it be more than one word?

Weinstein:  Not really interested in revealing the truth about their products.

Weinstein: Yes. More interested in closing a deal than in my well being.

Jones: Right. Now if those words were used to describe you, how would it make you feel?

Weinstein:  I know superb salespeople who are highly ethical. For example, a few years ago I reached out to a respected sales leader named Mark Hunter for a quotation in my column here, which a lot of people would be really keen to have. Mark knew that millions of people would read his words, but when I asked him for his take on the subject I was writing about, he said, "That's not my area of expertise. I can't do it." That's integrity.

Jones: Right. There are dozens of examples when you've been on the receiving end of somebody "selling" to you. Yet it's never felt like it, so you've never had the ability to attach that label to it.

Every time that somebody influences an action, behavior, or decision in your mind, you've been sold to. When it's done for your benefit, not the benefit of the other person, you've never received it that way.

For example, when you've met a great server in a restaurant that's influenced you to choose one dish over another, and that dish was the great choice for you, you think that what you've received is excellent customer service. Yet what in truth has happened is that you've been sold to.

Weinstein: Did you see the movie The Founder about Ray Kroc? At the end of the film, the character (who may or may not be an accurate representation of the man he is based on) reveals his view of business, and it's quite cynical. He says, in essence, "The whole point about business is to do whatever it takes to get what you want, by almost any means necessary."

What is the right way to the top? What is the right way to be able to win? These are ethical questions. In the United States, our markets are still very immature. This is a relatively new country in the grand scheme of things. We're not seeing brand integrity being able to be passed on from one generation to the next over a very long period of time.

Weinstein:  Can you give an example in England where there's been much longer success with taking the high road?

Jones: There's a restaurant in London called Rules. It's the oldest restaurant that has ever existed there, and it's into its seventh generation of ownership. It's changed hands a number of times, but it stands for a set of values. As a result, it still continues to perform at a high level and has a high-level waiting list today and a fabulous reputation.

Nobody tried to cash out with a short term view. Nobody stripped the assets. Nobody tried to beat up suppliers. They've taken a long-term view. We don't have so many people taking a long-term view here in the United States, because you can make a lot in a short period of time and it doesn't matter who you annoy on the way. Then that person can go into hiding, counting all their money.

That is a strategic decision, but keep the following in mind. If you want to be able to create something that has a lasting legacy attached to it, the integrity with which you get there is as important as the success that you enjoy with the check.

Weinstein: What you're saying applies not only to sales but to any human endeavor.

Jones: It's bringing other metrics to measuring success that aren't just dollar-centric. The majority of people have the finish line in the wrong place. What happens in the world of sales is that people celebrate the transaction. Whether that's the swiping of the credit card, the signing off of the purchase order, the receiving of the check, the handing over of the cash, that is the moment they celebrate the sale, and that is the wrong moment, through my lens, to celebrate.

Let's take the context of a wedding dress shop. If you're selling wedding dresses, what is the most important point in that transaction? For me it's the wedding day. It's not the day they decide to buy the dress. It's not the three fittings in between. It's the day that they wear that dress. It's, "What do the photos look like in that dress past that day? How did it feel on that given day? What is the legacy that is left behind as a result of them making that choice to be able to purchase that dress through you?" That's what the shop should sell towards.

They should be looking to the conversation with the bride after the event and celebrate the transaction when that product overdelivered on the day that mattered most to the customer.

Thank you kindly for reading this post. I hope you're having a good day (or at least not a bad one).