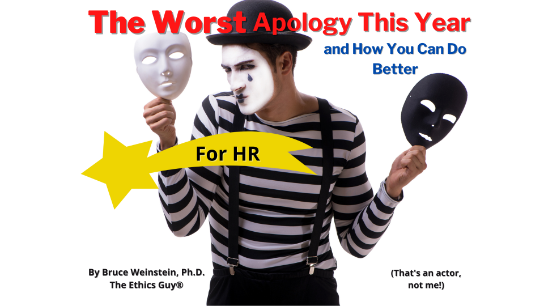 The Worst Apology This Year, And How You Can Do Better

The year's worst apology is this: “I exceeded the scope of the consent, and I’m trying to make an effort to make it right. I’m taking responsibility.”

What’s wrong with that? Nothing, if the infraction were, say, speaking too long at a meeting. But those words were uttered by a funeral home director accused of stealing and selling body parts from cadavers instead of performing the cremations her clients paid her for.

Let’s use this disturbing story to examine what an apology is and what it is not. We begin by looking at some typical bad apologies.

Examples of bad apologies and why they’re bad

“I’m sorry if you were offended.” The problem is you for being too sensitive. This might be the case, but sometimes the problem is whatever the person did that offended you. Why apologize if you don’t believe you did anything wrong?

“Mistakes were made.” This famous dodge has been used by politicians on both sides of the aisle, including U.S. Presidents Ulysses S. Grant, Richard Nixon, Ronald Reagan, Bill Clinton, and George W. Bush. Using the passive voice shifts responsibility away from the person at the heart of the problem: you.

“I’m sorry, but the reason I did it was....” Trying to explain why you did what you did is an attempt to justify it. That’s how the listener will hear it, anyway. Offering a reason is ethically unintelligent unless the other person asks for one. And they probably won’t.

There are many more examples of bad apologies, but it’s time to turn to the elements of an apology done well.

How to apologize with ethical intelligence

Do it soon. The longer you wait, the less convincing your apology is. It’s never too late to apologize in most circumstances, but it’s best to find the courage to apologize as soon as possible.

Don’t share the responsibility (also known as blaming others). Many ethical issues have shades of grey, but a good apology isn’t one of them. Either you made a mistake, or you didn’t. To the person on the receiving end of the mistake, it usually doesn’t matter who else might have played a role. Unless the wronged party asks, “Who else was involved?,” a meaningful apology means taking responsibility alone. Period. (In some circumstances, revealing who else was involved is inappropriate.)

Ask for forgiveness. This does two useful things: it reveals your humility, and it shifts the power to the person who was wronged.

Use words that fit what you did. This funeral director accused of stealing and selling body parts instead of performing the service she was paid for made an apology that trivialized what she did. In jurisprudence, we say that a fair punishment is one that fits the crime. The same idea applies to apologies.

Be vigilant in not making that mistake again. We can’t expect perfection from ourselves, but striving not to make the same mistake that got us into hot water is a reasonable goal.

The funeral director’s non-apology apology is a timely reminder of the importance of apologizing appropriately. We would do well to avoid these kinds of apologies:

The smart money is on doing this instead:

None of this is easy. If it were, everyone would be doing it, and there would be no need for a blog post like this. But there is.