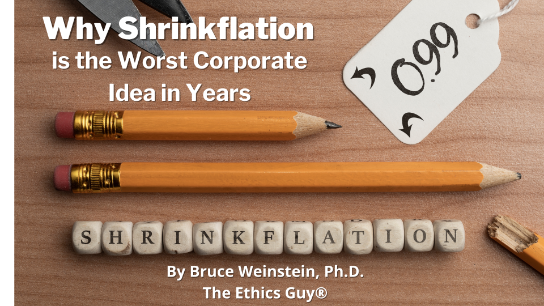 Why Shrinkflation Is The Worst Corporate Idea In Years

Shrinkflation is one response to the question, “How can businesses effectively deal with the increasing cost of manufacturing and distribution?” It involves making the package of a product smaller, rather than keeping the package the same size and raising the price.

What’s the big deal? In the photo above, a bottle of Gatorade goes from 32 fluid ounces to 28 fluid ounces. You hardly notice the difference, right?

It’s the not noticing that makes shrinkflation an ethically troubling response to a dire economic reality. Let’s examine what the problem is and how businesses could respond in a way that is both more ethical and more likely to keep the bottom line relatively healthy.

We begin with honesty.

Each December Gallup releases the results of its Honesty and Ethics survey. Americans are asked to rate the honesty and ethics of a range of occupational groups as very high, high, average, low or very low. Last year, out of 22 groups, nurses topped the list. Business executives and advertising practitioners were ranked 16th and 19th, respectively. The only groups considered less honest and ethical than people in advertising were members of Congress, car salespeople, and, at the very bottom lobbyists.

If you are a business executive or advertising practitioner—Gallup’s terms—you should be deeply concerned about these results. The worst things someone can be called are dishonest and unethical. If others think of you as rude or boorish, you are a person who doesn’t take the rules of etiquette seriously.

But if others view you as unethical, they see you as someone who doesn’t take them seriously. And not taking your customers seriously is, or should be, a cardinal sin in business.

You may not have noticed that your favorite beverage or snack now comes in a smaller package for the price, but now that you know, what will your response be the next time you see it for sale? “Who cares?” Probably not. “Wow, what a rip-off,” is more likely.

If you do choose to buy the product again, you’ll be doing so in spite of your feelings toward the company that makes it. For some consumers (such as your humble correspondent), the decision will be, “I think I’ll buy something from a company that doesn’t treat me like a buffoon.”

Shrinkflation is a form of deception and is therefore dishonest. What does dishonesty have to do with profits? Let’s take a look.

Ethics can be profitable

A report by the UK’s Institute of Business Ethics (IBE) suggests a correlation between business ethics and profitability. Its report, Does Business Ethics Pay?, concludes that “there is strong indicative evidence that large UK companies with codes of business ethics/conduct produced an above-average performance when measured against a similar group without codes.”

The mere fact that a business has a code of ethics on hand doesn’t necessarily mean its leaders act ethically, of course. One of Enron’s core values was integrity. The problem was that the leadership didn’t walk the talk.

But, as The Guardian reported, the IBE found “a strong correlation between having a code of ethics, addressing non-financial risks effectively and being an admired company.”

A lot more research needs to be done to show a causal connection between ethical leadership and profitability, but the IBE’s study is one of several that points in this direction.

What’s money got to do with it?

Some noteworthy companies reject the idea of giving customers less for their money and hoping they won’t notice. Domino’s Pizza announced in January that it would be giving customers eight instead of ten chicken wings for $7.99. This may have cost them some business, but what it did not cost them was the reputation of their brand. In the long run, that means more.

The common denominator is honesty. It’s the only hope for business leaders who are troubled by their consistently low ranking in Gallup’s annual survey of honesty and ethics and who want to show that it is indeed possible to do well by doing right.